Whether you’re heading to a ball game or a concert, nothing beats a day (or night!) at the ballpark. Check out these directions for arriving at Fenway Park via Commuter Rail, as well some suggestions for making the most of your trip. And if you’re riding on the weekend, don’t forget about $10 Weekend Tickets!

Inbound from the north:

After arriving at North Station on Commuter Rail, prepare to grab an outbound Green Line train to Kenmore.

Follow the station signs for the Green Line and wait at the platform for the next outbound B train to Boston College or C train to Cleveland Circle.

Once on board, ride eight stops to Kenmore, where you’ll depart and exit the station by following signs for Fenway Park. From here, it’s just a short walk to the stadium.

Inbound from the south:

Depart from Back Bay Station, where you can either enjoy a 25-minute walk or a short ride on the Green Line to the ballpark. If you choose to take the Green Line, walk to the outbound entrance of Copley Station and catch an outbound B, C or D Line train to Kenmore, where you’ll depart and exit the station by following signs for Fenway Park. From here, it’s just a short walk to the stadium.

After arriving at South Station on Commuter Rail, you have a few options. If schedules line up, you can hop on an outbound Framingham/Worcester train and get off at Lansdowne Station, which is just a short walk from the ballpark.

You can also take the subway. From South Station, follow the station signs downstairs to the inbound Red Line train toward Alewife and hop on board when the next train arrives at the platform.

Ride the Red Line two stops to Park Street Station and disembark, following the station signs for the Green Line.

Wait at a Green Line platform for either an outbound B train to Boston College, C train to Cleveland Circle or D train to Reservoir. Avoid taking an E train toward Heath Street, as it splits off from the other Green Line trains at Copley Station.

Once on board, ride five stops to Kenmore, where you’ll depart just a short walk from the ballpark.

Inbound from the west:

Board an inbound train on the Framingham/Worcester line and ride to Lansdowne Station (formerly Yawkey), then disembark at the platform and you’ll be within walking distance of the stadium.

Tasty Burger
1301 Boylston St, Boston, MA 02215
A classic stop for hungry ballpark visitors, Tasty Burger is a retro style burger chain that’s home to the Official Burger of the Boston Red Sox. Whether you’re looking for a bite before or after the game, this is a great place for your family to grab a burger, hot dog milkshake and more.

Bleacher Bar
82A Lansdowne St, Boston, MA 02215
Looking for an up-close view of the field? Stop by Bleacher Bar, located below the ballpark’s bleachers, before the game to grab a bite or a brew, and enjoy its one-of-a-kind view of the stadium. Just make sure to arrive early — this spot gets pretty crowded on game days. 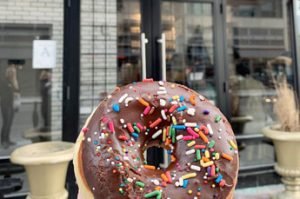 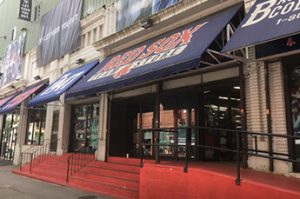 Prudential Center Boston
800 Boylston St, Boston, MA 02199
Interested in more serious shopping? The Shops at Prudential Center are an 18-minute walk from the stadium and offer more than 75 shops and restaurants for you to enjoy.

Lucky Strike Social
145 Ipswich Street, Boston, MA 02215
Have some time to kill before or after the game? Head over to Lucky Strike, which is just a few blocks from the stadium, to enjoy bowling, billiards, arcade games and more.

Game On!
82 Lansdowne St, Boston, MA 02215
Ping-Pong, batting cages, Cornhole — oh my! Located just steps from the ballpark’s entrance, Game On’s 13,000 square feet of floorspace is a great choice for killing time or grabbing a bite to eat during your next trip to Fenway.

Before planning your day, be sure to check full train schedules here, as well as any service alerts here.